Versilia, a place for all seasons

When we talk about Versilia, the first image that comes to mind are the sunny beaches and the dives in the sea; of course the summers here are fabulous but why not discover the wonders of the other seasons as well?

Spring and autumn are perfect for exploring the Apuan Alps, taking long walks on the beach or in the pine forests that overlook the coast; this is also an ideal time to engage in outdoor sports.

In winter, the sea changes its appearance and its colors, which take on a decidedly poetic atmosphere, often give us dizzying sunsets. When the temperatures drop, the Pania turns white and when the sun goes down we can admire its pink shades.

The nature of our lands deserves to be enjoyed in every season, but this is not the only reason to choose it as a destination even beyond the summer holidays: the cultural, artistic, gastronomic, playful and folkloristic events continue throughout the year, so you won't get bored even on rainy days.

In addition, Versilia is the ideal place for lovers of luxury shopping, here you will find exclusive boutiques and the glittering windows of the best brands: taking a tour during the winter sales period can give great satisfaction to your wardrobe.

Some of the events held every year in spring, autumn and winter

The spectacular parades and the festive atmosphere that reigns in the city during the days of masked courses attract thousands of visitors of all ages every year. You can indulge yourself, put on make-up and style and for a day (or even more) have fun impersonating what you like best. The mask is not a must, you can also participate as simple spectators, the joyful atmosphere will immediately infect you.

The papier-mâché floats are the undisputed protagonists of the Viareggio Carnival, majestic and colorful. You will see the parade along the promenade along the sea.

The Viareggio Carnival takes generally place from the end of January to the beginning of March.

In the capital, which is a few kilometers from Versilia, you can participate in one of the most anticipated events of the year that has always attracted a multitude of people of all ages.

A huge fair dedicated to comics, animation, games (role-playing, board, card games), video games and fantasy and science fiction imagery. It takes place between the end of October and the beginning of November and is considered the most important exhibition of the sector in Europe.

This important initiative is held in the month of March, hosts prestigious producers from all over Italy and many lovers and appreciators of good wine, offering a rich program of debates, tastings, culinary initiatives.

The Barsanti and Matteucci International Award was established in 2020 to commemorate Eugenio Barsanti and Felice Matteucci, inventors of the internal combustion engine. This is an award dedicated to those who have distinguished themselves in the field of automotive engineering and who continue to develop motor vehicles by comparing themselves with new technologies in respect of pollution and energy saving.

This event that attracts so much public takes place in Pietrasanta in the spring months.

For over 60 years there has been this recognition dedicated to the first Italian Nobel Prize for literature and great poet Giosue 'Carducci. Many writers, including Rondoni, Luzi, Erba, Cucchi have been awarded. On July 27 of each year, the day Carducci was born, the winner is proclaimed in the evocative setting of the Piazza del Duomo in Pietrasanta.

The event is dedicated to oil and typical products of Versilia.

Tastings, concerts, historical re-enactments and street artists' shows take place in the alleys that run through the historic center up to the Palazzo Mediceo.

On this occasion, the initiative "Pedalando tra gli ulivi" is also held, a bike route that, through olive groves, sculptors' workshops and small gastronomic stops, takes visitors from Querceta to the splendid Palazzo Mediceo where the events are held.

In Querceta, on the first Sunday of May, the Palio dei Micci takes place (in our dialect, the micci are donkeys). Thousands of figures parade and give life to exceptional shows that evoke the history, customs and traditions of the past. The Palio is not only a challenge between districts, but above all a choral performance, an event with a popular flavor that attracts people from all over Italy.

The districts compete for the banner by staging, in an imaginative and scenographic way, stories based on facts, places and characters that really existed. To embellish the whole music, colors and the parade of the historical parade that each district organizes to carry out the representation.

A weekend dedicated to local countryside products, from strawberries to seasonal vegetables, from aromatic herbs to fruit trees, is held in May at the majestic Villa Le Pianore.

At the end of April, Tonfano, a town in the municipality of Pietrasanta overlooking the sea, is colored with beautiful flowers and hosts a festival dedicated to gardening, crafts, with exhibitions and fashion shows.

Every year starting from November there are many events related to the Christmas holidays. Traditional dedicated markets that attract more and more tourists ... different and very original gifts that you can buy !! Happy Holidays!!!! 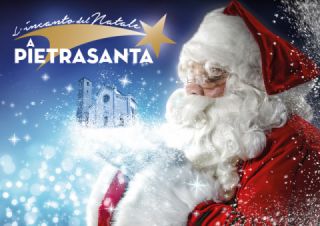 On the occasion of the Christmas holidays there will be many and very different events that will animate Pietrasanta.

For more information here are the contacts:

Ticket office at the theater two days before each performance from 5 pm to 7 pm; the day of the show from 17.00 onwards online purchase on the website www.ticketone.it